The principal role of the City of London’s Lord Mayor is as an ambassador for all UK-based financial and professional services.

The Lord mayor promotes The City of London overseas as well as making a number of business-focussed visits around the UK each year. He/she is host to key visitors to the City, advises Government on the views of the City businesses and supports the City of London in the provision of services to local communities, maintaining parks, museums and other arts venues in and around London. The Lord Mayor also runs a charitable appeal. 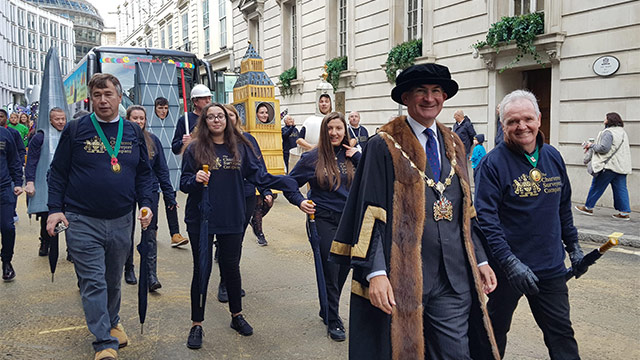 The Master, members of the Court and volunteers walking in the 2018 Lord’s Mayors show.

The role is an elected one, unpaid and apolitical, for a one-year term of office. Liverymen have the opportunity to vote for both the Lord Mayor and Sheriffs of the City of London at Common Hall. Application for tickets is organised though the Clerk to each Livery company.

The newly elected Lord Mayor takes centre stage in one of the most ancient and colourful of London’s traditions, The Lord Mayor’s Show.

Please click this link to access a film on the Culture Mile Event held at The Guildhall on 3‌rd May 2018 promoting the cultural aspects of the City of London.