Mobilization and Operational Output
The mobilization of 7010 Sqn personnel into Royal Air Force service continued during the period, with 7 Sqn members mobilized within the UK and 2 personnel mobilized overseas, as part of Operation SHADER. Manning of these posts remains a top priority for the Squadron. Operational output has also continued from the monthly training weekends at both of the Sqn’s Continuous Training Locations.

Whole-Sqn Training Weekend
For normal training weekends, 7010 Sqn’s two flights train at separate locations, with 1 ISR Flt located at RAF Marham and UK NCGI Flt at RAF Wyton. Each training year, 7010 Sqn holds one joint training weekend, to allow the whole Sqn to train together, to conduct mandatory training, and to sustain Sqn cohesiveness and esprit de corps. This year, the joint weekend was held at RAF Marham on 8/9 Oct 16. The photo (below) shows the whole Sqn in front of RAF Marham’s Canberra static display aircraft. 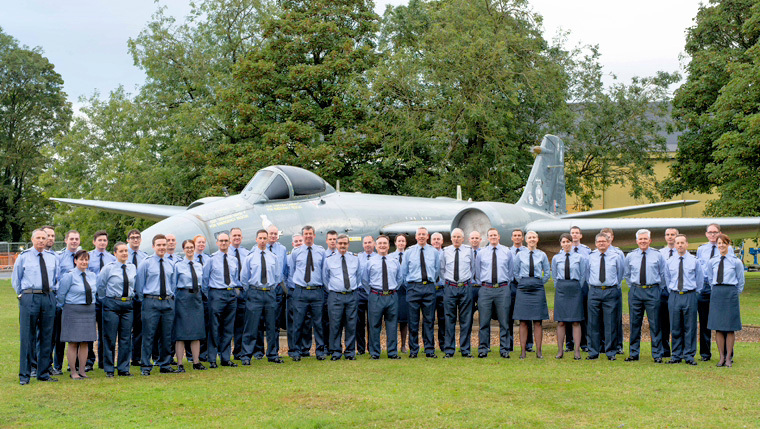 The whole Sqn training weekend is also an opportunity to present annual Sqn honours and awards, including the Surveyors’ Plate for Professional Excellence, which was presented by the Livery Company on the occasion of 7010’s 50th anniversary in 2003. The recipient is decided by OC 7010 and the Deputy OC, based upon recommendations by Flt Cdrs. In recognition of his professionalism and performance as a Mission Commander during mobilised service, the Surveyors’ Plate was awarded to Flt Lt Matt Byrnes. The photo, below, shows Honorary Air Commodore (HAC) Patman presenting the Surveyors’ Plate to Flt Lt Byrnes on 8 Oct 16. 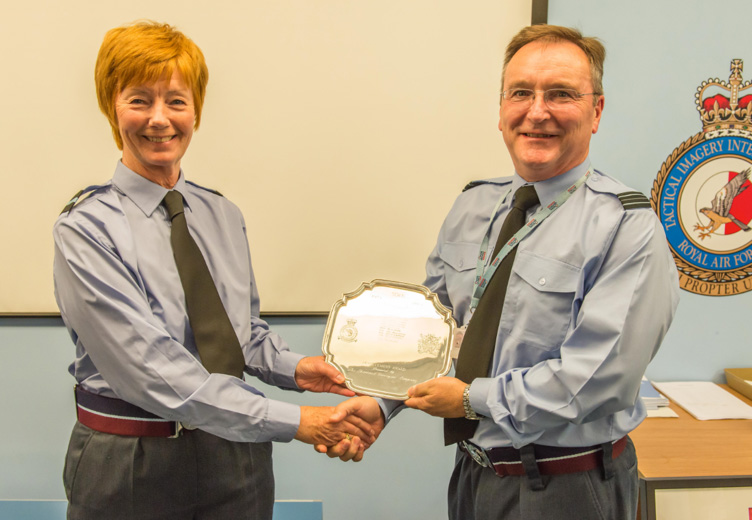 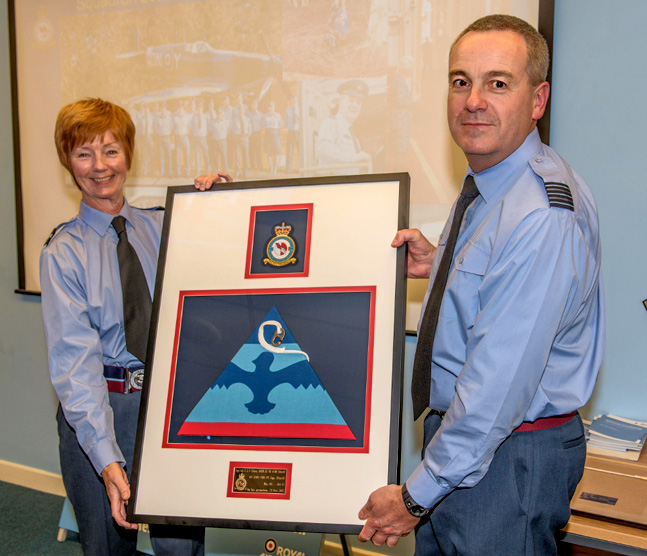 Mobilisation and operational output
135 Sqn have a number of roles: Geospatial Information Dissemination (GID), survey, geospatial analysis and in the future bulk reproduction of mapping.
The Sqn continues to provide geo support to the Army, Defence and wider Government.
The Sqn has a constant remit to provide geo support when required to the following customers:
• Foreign and Commonwealth Office, and has 2 personnel on call to support crisis response activities;
• Allied Rapid Reaction Corps (ARRC), in support of NATO, ARRC is the force that will provide the NATO Reaction Force for NATO in 2017;
• VANGUARD – support to a UK Divisional deployment.
Additionally we have supported Special Forces, Defence Intelligence Fusion Centre, NATO Defence Intelligence Fusion Centre, 1 Div, and wider Intelligence to name but a few.
The main Sqn HQ activity has been working out a response to the latest Army Readiness Order liability.

Training
Training year 16/17 was designated a training year with all personnel concentrating on attending technical, command and leadership courses as required for career development and promotion. In September we had a driver training concentration consisting of vehicle familiarisation and cross country driving to ensure that personnel are able to deploy in the GID role driving large MAN SV trucks. It also included a military phase which included competitive shooting and escape and evasion and a review of the way forward for the delivery of GID. Indeed the Sqn is to shortly brief the Norwegian Army on how the UK delivers GID, as they are potentially to create a similar capability.
In October we undertook a Battlefield study to the United States taking in the Battlefields of Gettysburg and Richmond area. In addition to the geospatial appreciation of the ground, the study evaluated lessons that should have been learnt from the Civil War, an industrialised war, and applied in the First World War. It included terrain studies coupled to the battles, review of the role of mapping in the campaign, culminating in a bespoke visit to the Library of Congress to view and handle original mapping from the period. We were also able to go on a behind the scenes tour of the map library.
The look forward encompasses further surveying and GID technical training, attendance of ARRC exercises and upon arrival of the new Bulk reproduction capability, training in this new role. 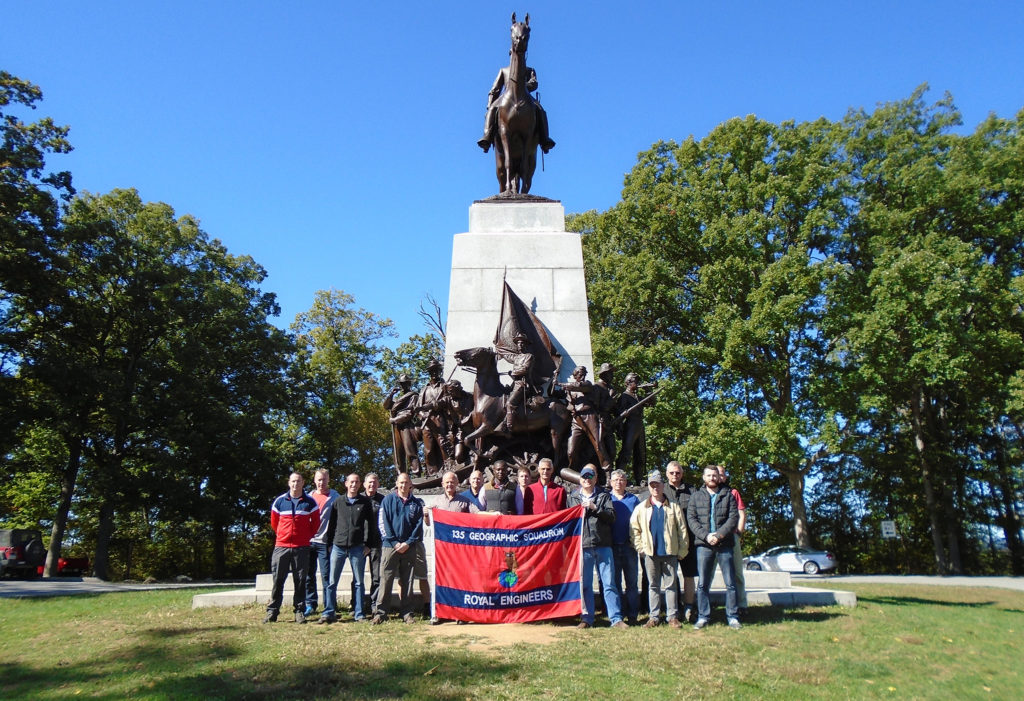 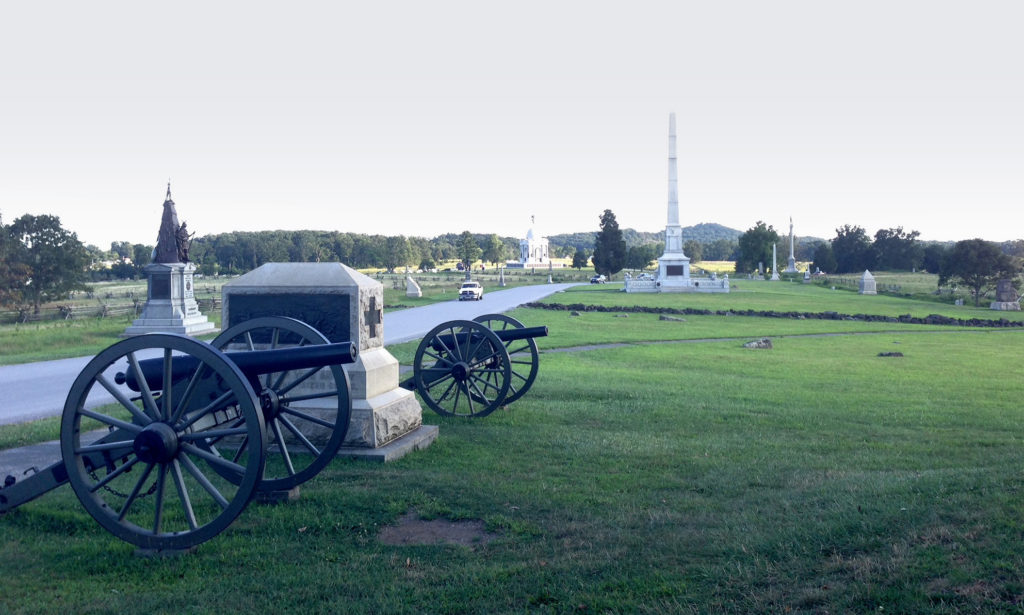 Training for Frontline Operations September – October 2016
In order to ensure that HMS ECHO was ready to operate away from the UK, we had to prove that we were safe and operationally ready. Fire fighting, damage control, replenishment at sea, casualty rescue…if you can think of any number of things which could be realistically expected of us, we have been trained in it! During an intense five week training package, the staff at Flag Officer Sea Training pushed the team so that we could safely operate HMS ECHO in any situation from normal peacetime, through to high tempo war fighting. The team worked exceptionally hard throughout this period and deployed only a matter of days after completing this training. 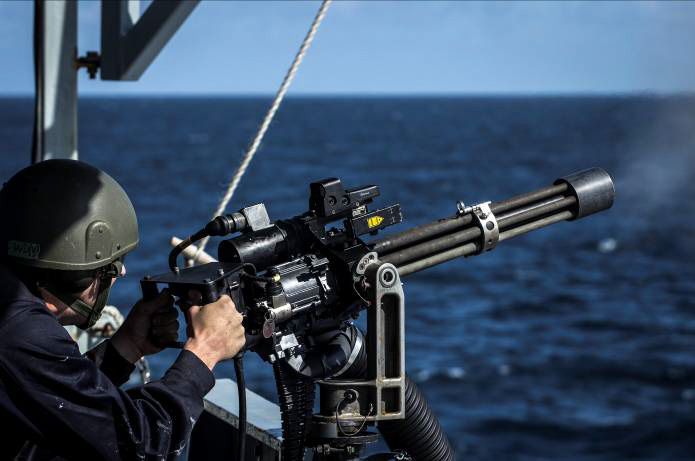 VESSELOP SOPHIA – Migrant Rescue December 2016 – Present
Following a short maintenance period in Malta, HMS ECHO took over as the UK’s contribution to Operation Sophia. The UK has been part of this operation since it was launched in July 2015 when our sister ship, HMS ENTERPRISE, joined the EU task group which is helping to tackle the issue of irregular migration in the Mediterranean.The first month on task was a true baptism of fire as the Ship’s Company worked long, intense hours to rescue a total of 1234 migrants from a variety of boats. This has included a number of young children and babies. Many had been out at sea for days in their boats and were exceptionally grateful.