Mobilization and Operational Output. The mobilization of 7010 Sqn personnel into Royal Air Force service continued during the period, with 6 Sqn members mobilized within the UK and 2 personnel mobilized overseas. Manning of these posts remains a top priority for the Squadron. Operational output has also continued from the monthly training weekends at both of the Sqn’s Continuous Training Locations.

Deputy Commanders’ Commendation, Flt Lt M Byrnes. In recognition of the highly professional way in which Flt Lt Byrnes carried out a recent mobilisation, he was awarded the DCOM’s Commendation in the 2016 New Year’s Honours list. The Commendation was presented to Flt Lt Byrnes by the RAF Marham Station Commander on 19 Jan 17 (photo below). 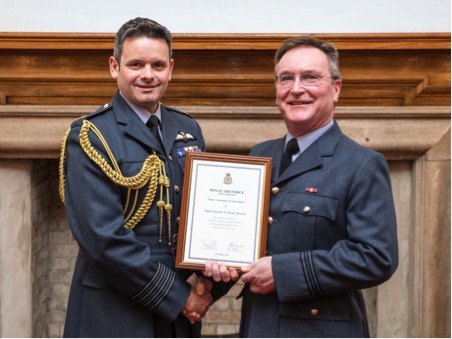 Farewell to FS John Wilson. FS John Wilson recently retired from the Sqn after 40 years of regular and reserve Air Force service (John was awarded the Surveyors’ Plate in 2015 in recognition of his long and loyal service). In January, 7010’s NCGI Flt said farewell to John, and A/Sqn Ldr Gray presented him with a limited edition print of an SR-71 reconnaissance aircraft (photo below), as a reminder of John’s work with these aircraft at RAF Mildenhall during the cold war. 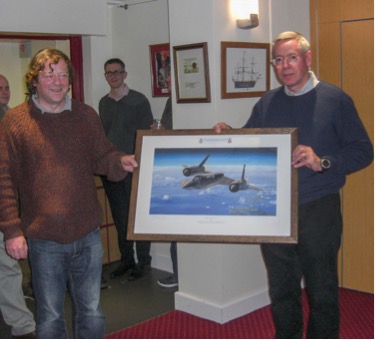 Rowing Success. Congratulations to 7010 Sqn member SAC Lou Elkington who came first in the Head of the Nene race on 4 Feb 17, as a member of the RAF Women’s Coxed Fours team (photo below). 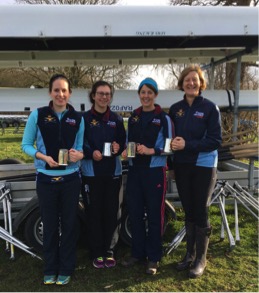 Since the last update HMS ECHO has remained in the Mediterranean as the UK’s contribution to Operation SOPHIA, the military aspect of the EU’s response to the humanitarian crisis caused by mass migration from North Africa into Europe. The ship has now rescued over 3000 souls since commencing operations at the end of last year, including one event which saw over 600 people rescued. Amongst this humanitarian work, her Ship’s Company, which is now truly both Joint and Combined with representatives from the Royal Marines, British Army, Royal Air Force, Royal Australian Navy and Bahraini Defence Force amongst their number, are continuing to keep their core skills sharp with continuation training ranging from close range weapons firings to survey training and wreck investigations so that ECHO can respond to any future crisis in her core role of Military Data Gathering.

There was a welcome break from Operation SOPHIA when ECHO was tasked to proceed to Monaco and support the United Kingdom Hydrographic Office at the first Assembly of the International Hydrographic Organisation. In the company of multi-million pound superyachts, ECHO hosted a reception for the heads of hydrographic organisations from around the world on behalf of the UK National Hydrographer, Rear Admiral Tim Lowe.

TRAIN
Training has been a series of exercises to test our capability both personnel and equipment
· In January we ran a test exercise to test our GID capability
· In February we ran a similar exercise to test our Survey capability
· In March we conducted a MATTs weekend to test our core military skills such as shooting and First Aid
This is a look forward to our final test exercise in June when we conduct and test the whole flow from mobilisation, through preparation to deployment, culminating in a week long exercise with the wider ARRC.
We anticipate delivery of the new bulk reproduction capability in August ready for training to start in September.

UTILISE
135 Sqn have a number of roles: Geospatial Information Dissemination (GID), survey, geospatial analysis and in the future bulk reproduction of mapping
The Sqn continues to provide geo support to the Army, Defence and wider Government, but our main effort has been geared to our remit to provide geo support when required to the following customers-
Allied Rapid Reaction Corps (ARRC), in support of NATO, ARRC is the force that will provide the NATO Reaction Force for NATO in 2017
VANGUARD – support to a UK Divisional deployment
Additionally we have supported wider Defence within the international sphere- providing GID training to forces deploying to Estonia, and exchanged GID experience whilst hosting the Norwegian Army to name but a few.

RETAIN
The Sqn is currently conducting adventure training on the Isle of Wight participating in kayaking, mountain biking and climbing.
We look forward to a Battlefield Study to Passchendaele
Unfortunately an Expedition to Kyrgyzstan has been cancelled for reasons outside our control, but new plans are being laid for a potential new destination of Ecuador. Many thanks for the financial support.
We are also holding an Engagement Open Day on 15 July from 1400-1600, we wish to extend an invite to WCCS members who wish to visit our Sqn location in Ewell near Epsom. See what we do and see the equipment we use. If anyone is interested please contact 42ENGR-135SqnRSUSO@mod.uk for more details. It has been a while since we showcased our capability so please come and visit.