After the successful deployment to Cyprus in Nov 15, 135 Geo Sqn are focusing on building up their training focusing on their core mission – Geospatial Information Dissemination across Defence (i.e. hard and soft copy map distribution). As we are Defence’s sole capability on this area, it will be the focus of the Squadron’s training. This is being complemented by continued training on standard GIS but also utilising GIS apps. We are currently increasing our use and utilisation of ArcGIS on-line (AGOL) which should present some very useful applications in much of the Squadron’s work. Geodetic Survey will also remain key to all our training.

As the Squadron grows, we are also developing how we train and mentor all ranks. We are fortunate to have excellent calibre across all ranks which will enable us to really further our capabilities within both the Squadron and wider Regiment and then Defence. We currently also have one officer on attachment to Falcon Squadron Royal Tank Regiment who are the lead on CBRN within the Army. The Sqn continues its support of FCO operations.

Clearly there are also many other activities. The main one is the forthcoming endeavour Dinner celebrating the WCCS Endeavour Award winner. In addition the Squadron is planning a canoe trip along the Rideau Canal, Canada in May. This will be good adventurous training but also allow us to further links with the Canadian Army Surveyors as well as celebrate the Royal Engineers 300th anniversary – the canal was originally built by the Corps!

Mobilization and Operational Output: The mobilization of 7010 Sqn personnel into Royal Air Force service continued during the period, with two additional Sqn members mobilized and manning ImInt posts, both in UK and overseas, as part of Operation SHADER. Manning of these posts is a top priority for the Squadron. Operational output has also continued from the monthly training weekends at both of the Sqn’s Continuous Training Locations.
One of the mobilized personnel, Flt Lt M Byrnes, was awarded the DCOM’s Commendation in the 2016 New Year’s Honours list, for the professionalism shown during his period of service at RAF Marham.

Training: Attestations of new personnel have continued apace, with personnel successfully completing the Basic Recruit Training Course (BRTC) at RAF Halton in December and January. The recent effort to recruit greater numbers of Intelligence Reservists is bearing fruit, with 7010 Sqn’s strength continuing to increase. The next batch of trainee imagery analysts began their Reserve Forces Imagery Analysis Course (RFIAC) at DISC Chicksands in October, and are continuing to learn the basic principles of the imagery trade. More experienced personnel also undertake leadership training, with another Sqn member graduating from the Advanced Management and Leadership Course (AMLC), also held at RAF Halton.

Other Activities: Plt Off T Overton and Sgt J Smith joined some of their UK reservist colleagues at a reservist employer conference on 9 Dec 2015, organised by their employer, Atkins Ltd, at the Royal Society of Engineering in London. This event was part of the celebrations following the award by the MoD of ‘Gold Standard’ to the company. The Minister of Reserves, Julian Brazier, was guest of honour and VIPs in attendance included Admiral, the Lord West, Atkins’ Defence consultant (see photo). 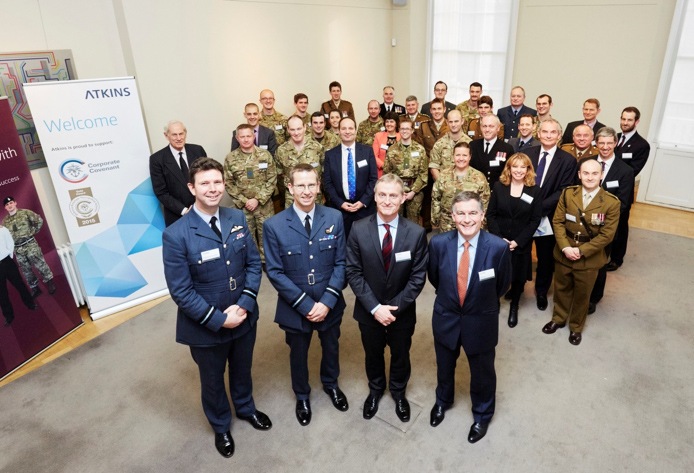 HMS ECHO has sailed into a new role in 2016, taking on Marine Enforcement duties around the United Kingdom. In support of the Marine Management Organisation(MMO), HMS ECHO is enforcing National and European Fishery legislation in UK Fishery areas. The work includes conducting boarding operations of a variety of fishing vessels to ensure they are catching fish in accordance with strict guidelines. This has been a challenging period for HMS ECHO, learning new skills and attempting to understand and enforce complex rules which control the fishing industry. HMS ECHO will complete fishery tasking in April before regenerating as a survey platform in the summer 2016.