The Charitable Trust, established in 1977, has, through the generosity and enthusiasm of Liverymen, accumulated considerable charitable funds. (The current value of the Fund is over £1.8 million). It is invested and managed on a day-to-day basis by Cazenoves Capital Management and administered by members of the Court as appointed Trustees, with the Charity Committee acting as advisers.

At least 50% of the Trust’s income is given in grants to charitable causes selected by the Trustees. The remainder goes into reserves to build further investment income.

Income is generated from fundraising events, regular donations, bequests and investments. In 2017 the Trust gave more than £200,000 including a one-off donation to Treloar’s School and College, a registered charity providing education, care, therapy, medical support and independence training to young people with physical disabilities. The donation was a major contribution towards the purchase of a specially adapted coach for school trips. https://www.treloar.org.uk/ 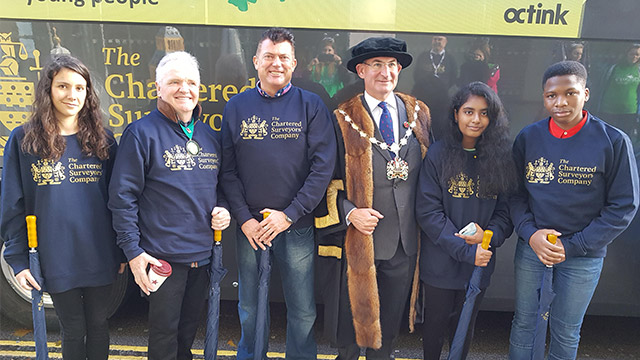 Where the money goes

The Chartered Surveyors Training Trust (CSTT) was for a number of years the flagship beneficiary of the Trust.

The education initiative is funded by the Trust with support and mentoring provided by the work of the Education Committee.

In addition to the ongoing support for four London Schools the Trust supports a music initiative at Archbishop Tenison.

Each year the Trust offers a bursary to a student from each of the supported schools who is going to study at university and where personal circumstances may mean without this help they are unable to take up a place.

Funds are allocated each year to the Guildhall School of Music both to sponsor a competition and support a bursary.

The Trust supports two bursaries at the Central School of Ballet for final year students as nominated by the school.

A donation is made each year to the Lord Mayor’s appeal, which in turn supports a wide range of charities.

The Company has a close association with Ironbridge Gorge and is supporting the renovation of the historic estate office.

Ad hoc requests for support are received throughout the year and considered by the board with smaller donations often being made to a variety of deserving causes.

The Trust provides support in the form of prizes and donations to our military affiliates from the armed services and the Sea Cadets – see Military Affiliates page.

The Company’s reserves are in good health however we recognise resources are modest compared to some Companies. We, therefore, seek to support causes and charities where we can make a significant difference and those that are closest to our declared Livery purpose of education, City and Mayoralty.